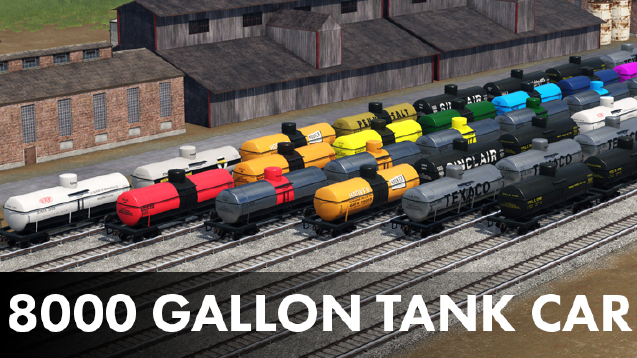 This mod has a whole bunch of tank cars vaguely based on a 1917 design I had saved on my computer that has too much photocopier burn on it for me to be able to identify the manufacturer. The 3d model is old and not very good but I hope it’s an improvement from the TPF1 model.

Questions No One Asked but Which I Shall Answer Anyway

Where are my favorite 1917 railroads? you didn’t do skins for the PRR/N&W/Frisco/UP/FEC/BNSF???

Railroads got out of the tank car business almost immediately after tank cars were invented in the immediate post-bellum era. Hauling oil to tidewater from Pittsburgh or Cleveland was only economical if you had a similar amount of fluid to haul back to Cleveland or Pittsburgh, otherwise it makes a lot more sense to make someone else own the cars and charge them a flat mileage rate. For more information consult almost any US history book and look up Standard

Well then why isn’t there a Standard Oil car?

UTLX was part of the Standard Oil cartel which also involved all your favorite railroads. They didn’t like to advertise the fact on the cars because then people might notice and raise a stink about how there was only one oil company which shipped with only one tank car company.

Sounds bad, I’ll avoid those cars because I support competition in the free market. Thank God Teddy Roosevelt broke up the Standard Oil monopoly and saved capitalism. Anyway I assume there’s nothing worse in there!

Yeah no that’s the least of it:

-Utility Gas – I actually don’t know anything about these guys, I just liked the logo. Probably some commercial natural gas distributor with a fuel oil division.

-Penn Salt – formerly a simple salt mining company, later a producer of many nasty chemicals (mostly chlorine) but y’know you kinda need nasty chemicals for modern society. Not sure of any specific disasters these guys caused. (Quakers win again!)

-Hooker Chemical Company – buried nasty chemicals in Niagara Falls and allowed an elementary school to be built on the site many years later, resulting in many long-term diseases in those kids later. Look up the Love Canal.

-Dupont – They make many chemicals and a good chunk of those chemicals go into bombs, and a good portion of those bombs are dropped on kindergartens and weddings and hospitals.

-Ethyl Corporation – hoo boy. They made the lead in leaded gasoline. Look I am a materialist and think economic conditions are the cause of social problems but holy hell does atmospheric lead correlate well with violent crime rates.

Jesus Christ, what the frick

Yeah old tank cars mostly hauled bad stuff as it turns out. (This is still the case with new tank cars!)

Can I feel good about myself while using these cars?

Yeah it’s a video game, you don’t have to worry about this crap. You’re not supporting IRL Hitler by putting Texaco cars on Line 2 in 1937, and you’re not bombing Yemeni children by putting Dupont cars on Line 7 in 2020. Go do some organizing IRL ffs.

Good. my mind has been put at ease. So what are the stats?