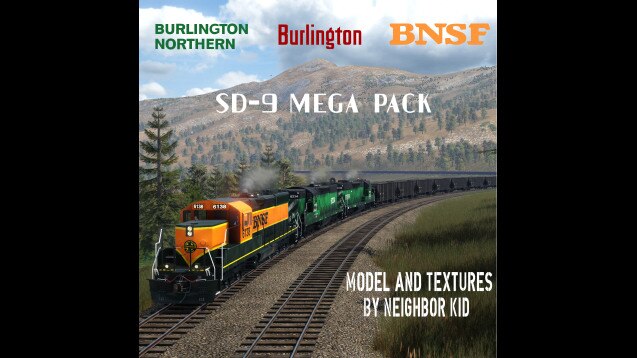 Just like my other SD packs, they are significantly edited and modified Urban Games GP-7 models to fit the SD series.

– All road numbers have corresponding reverse, non-crew forward, and reverse units! (NC).
– Total of 112 units!
– Model Citizen Couplers
– Sounds by Mr. Cheesecake – You need the 567 Common Sound pack to hear these rolling down your Marias Pass
– 4 Camera angles around the cab. All are relatively close to each other.

When will these SD’s end?
I’m getting close to being done with this series of SD7/9 locomotives. Next up will be the Baltimore and Ohio SD7/9 pack. Won’t be nearly as large as the past few previous packs. After that, the semi user-friendly version for everyone else who wishes to make their own roads for these locos will become available. From there, I know I said I was going to start working on Geeps, but I’m honestly tired of looking at this model and working on the revised Geeps. It’s pretty much looking at the same model… Just shorter… So I’m going to turn back over to working on some steam. First, up will be the B&O Thatcher Perkins & variations! Anyway…. Enjoy the pack! Thank you to Everyone who has helped me get this far… It will only get better, especially when I get back to working on my own ground-up models!