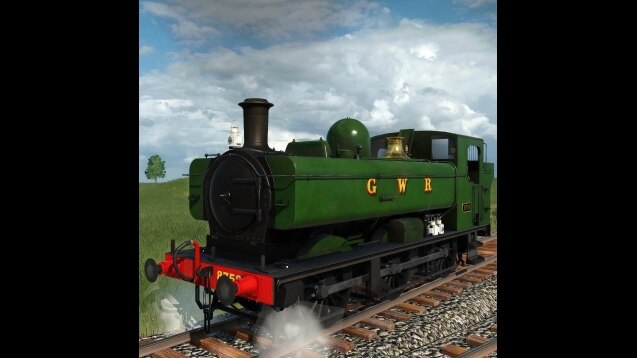 GWR 0-6-0 Saddle Tank 1076 ‘Buffalo’ class.
Many saddle tank engines were built by the Great Western Railway from the 1860s onwards. This included 266 built between 1870 and 1881 in the 1076 class by Joseph Armstrong. The design featured double frames which allowed 50 to be built as, or converted to, broad gauge and later be converted back to standard gauge. Their large construction made them capable of mainline duties, for both passengers and freight. Almost all the 1076 class saddle tanks were rebuilt with pannier tanks between 1910 and 1930. The new, more efficient rectangular ‘Belpaire’ fireboxes, necessitated the radical change. Most were replaced in the 1930s by the newly built 5700 class pannier tanks, but the last to be withdrawn wasn’t until 1946.

GWR 0-6-0 Saddle Tank 1854 class.
120 of William Dean’s 1854 class were built between 1890 and 1895. Their single-frame construction and proportions set the mold for later GWR 0-6-0 tank engine designs. All bar one of the 1854 class saddle tanks were rebuilt with pannier tanks between 1909 and 1932. The new, more efficient rectangular ‘Belpaire’ fireboxes, necessitated the radical change. Long-lasting, all ran over a million miles before their withdrawal, with 23 passing to British Railway’s ownership at nationalization in 1948 and the final one being withdrawn in 1951.

GWR 0-6-0 Pannier Tank 5700 class.
By the late 1920s, the Great Western Railway had over a thousand 0-6-0 tank engines, of which many were aging rebuilds of saddle tanks from as early as 1870 and a mixture of acquired designs from the 1923 company groupings. The solution for Charles Collett was the 5700 class, which was in essence very similar to the pannier tank rebuilds of the 1854 class and others, but with modernized refinements, fully enclosed cabs, and a little more power. Although designated as ‘light goods and shunting engines’ they were often used for passenger services on branch lines and other short routes. 300 were built in their first 3 years and 863 were eventually built, making them one of the most numerous British steam engines. 16 are now left in preservation.

GWR 0-6-0 Pannier Tank 8750 (5700) class.
A further improvement of the 5700 class, the 8750 subclass had taller cabs with better visibility and protection for the crew. This would be the standard design for new engines of these classes from 1933 to 1950. After nationalization a final 41 were built under British Railways between 1948 and 1950. Pannier tanks continued to be numerous in BR days, with over 1,000 still in use up to the start of the 1960s. 5700s were the last steam engines to work on the former GWR/Western region, lasting through to 1966.

Reversible – can reverse instead of flipping at the end of the line, when another reversible item is on the other end of the train, or when on its own. (Lamps and crew swap to match direct.)
Custom sound effects. Extra steam effects. Supports user colors. No aging or user logo.
18 on-build camera views (8 custom on each side). Unknown issue/limitation: On reversed versions, camera direction isn’t switched, so maybe the first view is obscured.
Reversed versions of all (facing the opposite direction, as Multiple Units in a separate menu, “[R]”).
Includes placeable Asset versions.
Performance/internals: 5 LODs (~33,600 to ~100 tris). Textures are mostly DDS, 4Kx2K or less. And 4 items grouping menus.

Additional historical liveries may also be made in the future.