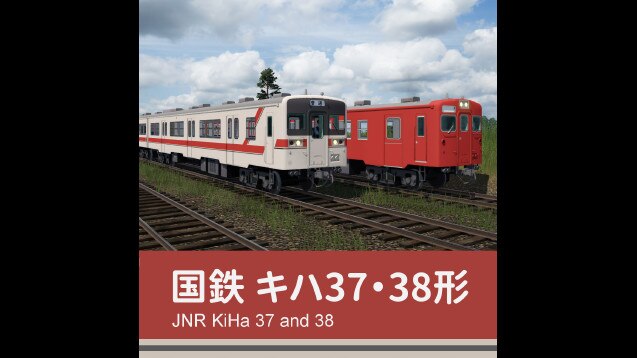 Kiha 37 and 38 are DMUs for regional transportation and commuting, built in small numbers in the 1980s at the end of the JNR era. Kiha 37 was developed in 1983 as a DMU for regional transportation that was more efficient than Kiha 40, but only five cars were built: three for the Kururi Line in Chiba and two for the Kakogawa Line in Hyogo. The Kiha 38 was a commuter DMU developed to replace the Kiha 35, 7 cars were built by reusing parts from the Kiha 35, and were put into service on the Hachiko Line in Kanto.

Kiha 37 was designed to be more cost-effective than the Kiha 40, and its engine was JNR’s first direct-injection type. The livery is a deeper red than Kiha 40. The No. 0s have toilets and the No. 1000s do not. Only five cars were built, the two cars on the Kakogawa Line in Hyogo were moved to San-in in 1999 and scrapped in 2009, while the three cars on the Kururi Line in Chiba were retired with the introduction of the Kiha E130 Series in 2012. The three cars retired from the Kururi Line have been operating on the Mizushima Rinkai Railway in Okayama since 2014.

Kiha 38 was designed to reduce costs by using scrapped parts of Kiha 35 and parts for bus vehicles. It was the first air-conditioned DMU for regional transportation of JNR, and its doors are of the door pocket type. The No. 0s have toilets, and the No. 1000s do not have toilets. Seven cars were deployed on the Hachiko Line, and after partial electrification of the Hachiko Line in 1996, they were moved to the Kururi Line, where they remained until the introduction of the Kiha E130 Series in 2012. After retirement, one car is in static preservation in Chiba, one has been operated by Mizushima Rinkai Railway in Okayama since 2014, and five cars are in operation in Myanmar in Southeast Asia.

Three KiHa 37 cars and one KiHa 38 car (and another Kiha 30) were transferred to Mizushima Rinkai Railway in Okayama, and are operated during weekday rush hours. Two Kiha 37s were painted in Mizushima Rinkai livery, and one each of Kiha 37 and 38 was painted in JNR standard colors (similar to Kiha 20), but the latter two were changed to JNR-era red for Kiha 37 in 2021 and to Hachiko Line revival livery for Kiha 38 in 2022.