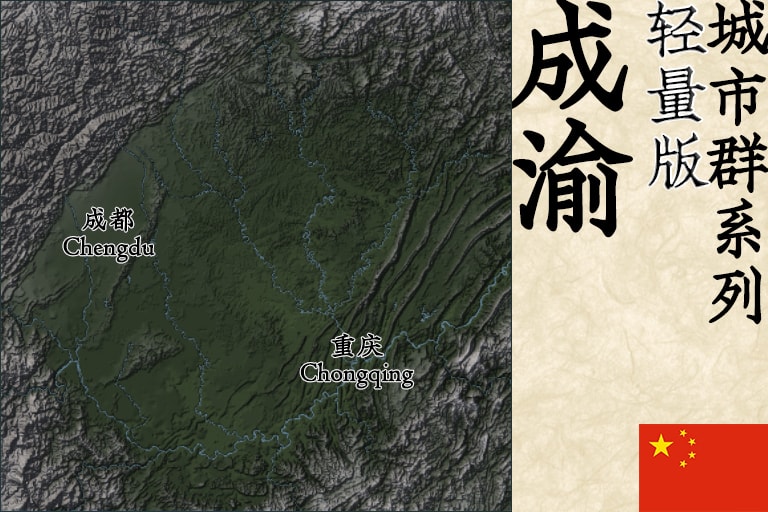 Notice:
The size of this map is "Juju", you must set the experimental map size mode (arrogant mode) first.
The setting method is: Open the file path: Steam / userdata / your ID / 1066780 / local / settings.lua
Line 15 "experimentalMapSizes = false" is changed to "experimentalMapSizes = true"
This map requires to set "experimentalMapSizes = true" in "Steam / userdata / (Your ID) /1066780/local/settings.lua"
In addition, the amount of data on this map is very large and may take a long time to load. Please wait patiently while loading.
Due to the large number of original map cities, smooth running requires strong computer performance. To this end, a "light version" has been added, retaining only major cities. Players with 16G memory and below are recommended to choose this version.
Map making background: The author is a graduate student majoring in geography. He is often exposed to GIS data, population, and other urban socio-economic statistics. He has participated in some urban and regional planning projects. The author is also a traffic enthusiast. I want to make full use of the professional GIS data and software at hand to make a set of maps that are more in line with the real scene for everyone. I hope everyone can have fun!
Initial plans are to produce a series of metropolitan areas (mainly China's first and second-tier cities) and a series of urban agglomerations.
Map introduction:
The urban agglomeration series maps into the Chengdu-Chongqing urban agglomeration. The important cities in the scope include Chengdu and Chongqing. The map covers Sichuan, Chongqing, Guizhou, and Yunnan provinces.
Including 182 industries and 49 cities, the road network has been automatically generated and can be played directly.
The size of the city is strictly based on the data from the sixth census.
Terrain height is generated based on meter-level GIS data, and strictly scaled in an effort to restore the real scene.
The game started on October 1, 1949.
Includes the following cities:
Cities in this map include:
Chongqing (Chongqing / Chungking)
Fuling Changshou Jiangjinhechuan Yongchuan Minjiang Danan Rongchang Liangping Chengdu (Chengdu / Chengtu)
Longquanyi Xindu Shuangliu Dudujiangyan Pengzhou Chongzhou Zigong Luzhou Lichuan Deyang Zhongjiang Mianyang Santai Jiangyou Guangyuan Suining Anju Shehong Neijiang Zizhong Longchang Leshan Nanchong Zhongzhongshan Renshou Yibin Xuzhou Daxuan Xuanhanqu County Yaanba Zhongzi Yang Anyue

Credits:
We don't have any information about the author of this (Lightweight Edition) Chengdu-Chongqing, China (Lite) Mod mod. If you are an author, please contact us or leave a comment below and we will add your credits for Transport Fever 2 mod.