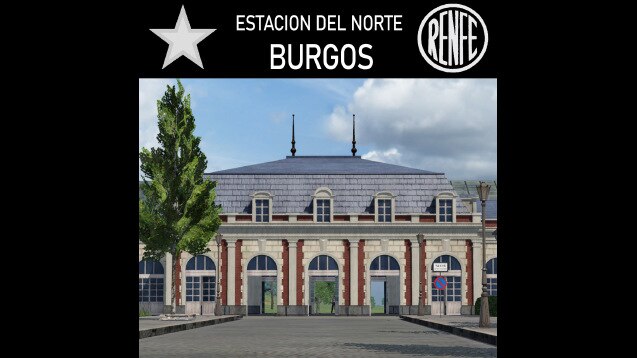 Burgos Norte station Madrid-Irun-Hendaye line, 1890
In 1890s, the NORTE company decided to replace some provisional 1860s buildings on its mainline. The first stations renewed were Burgos (1890), Medina del Campo (1892), Valladolid (1895), and Irun (1896), all these new buildings were designed using the style that NORTE knew as _Imperial_ or _French_ style, with red bricks and white stone for ornament, also was common the use of slate tiled roof, instead of ceramic roof that was the common material on the region.
For the case of the Burgos station, the structure of the original 1864 station was used and extended, becoming a 90m long building. The building was divided into three parts, where the middle part was used as a ticket office and waiting room, and the side parts were used for the luggage office and police station. Also, the station got a glass roof that covered the two platforms. In addition to this, next to the station in the late 1890s a cargo warehouse was built and, on the opposite side, a little rail yard to park many freight wagons.
After the creation of RENFE the station didn’t get any modification unless some roof renovation until the late 60s, when the glass roof was demolished, and replaced by concrete Peron roofs. The station remains in use until December 2008. Three years later the tracks were removed, and all buildings, except the main one, were destroyed. Nowadays, that building has been restored and is used by Burgos University as an engineering school.
This mod shows the station in its circa 1900 state, with choosable cargo and rail yard options. Also, the buildings had been divided into 20m modules for larger flexibility in the game.