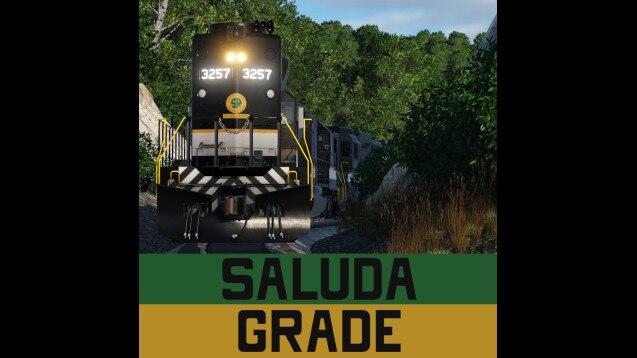 “The glory of the moment captures the mind and the spirit of those who come to the land of the skies.”

This is the Saluda Grade! Also known as Norfolk Southern’s W line, this now-exempt stretch of the rail corridor is famously known for being the steepest mainline rail grade in North America. Southern Railway built the line in the 1870s from Spartanburg, SC to Asheville, NC, and over the years it hauled coal, wood, and miscellaneous goods over the pass. After merging with the Norfolk and Western Railway, the line saw decreased traffic as easier alternative routes were used. Today, the line is abandoned, washed out, and decrepit, but still stands as a monumental achievement in railroading engineering.

So, what’s on this map? This map is a 1:1 scale map, meaning that the height map is accurately scaled to within 30 feet of real elevation. Being 1:1, the map is not big enough to model the entire W line; instead, this map models the section from Campobello, SC to Mountain Home, NC. Included are towns like Hendersonville, Flat Rock, Columbus, and Tuxedo, along with Saluda, of course. All towns were generated using the TpF town spawning system, meaning road layouts are not accurate. Saluda itself has been modified, though, to offer an accurate alignment for the railroad through town. Also included are ~50 randomly-generated industries for your playing benefit! Also included are some stretches of ballast near and around Saluda to help guide you to the accurate, real-life ROW that the Southern chose.

So, how do you play this map? Well, there are several ways to play this map. The initial start date is set to 1950; you can start from here and become a mid-century titan of the Blue Ridge, or you can go all the way back to 1870 and pioneer the mountain crossing. You can also enable sandbox mode and no cost and attempt to make the most accurate Saluda Grade possible, following the height map to a T, and completely rebuilding towns down to the very house. Or, you can be lame and make a rail trail.

Please note that this map may seem relatively barren; this area is sparsely-populated, so the lack of towns mirrors real-life conditions.
Also note, the Appalachians are very well-covered with trees and other foliage, so this map is rather tree-heavy to reflect that. This may impact performance on some systems.

Have fun conquering Saluda, the mountain of challenges!