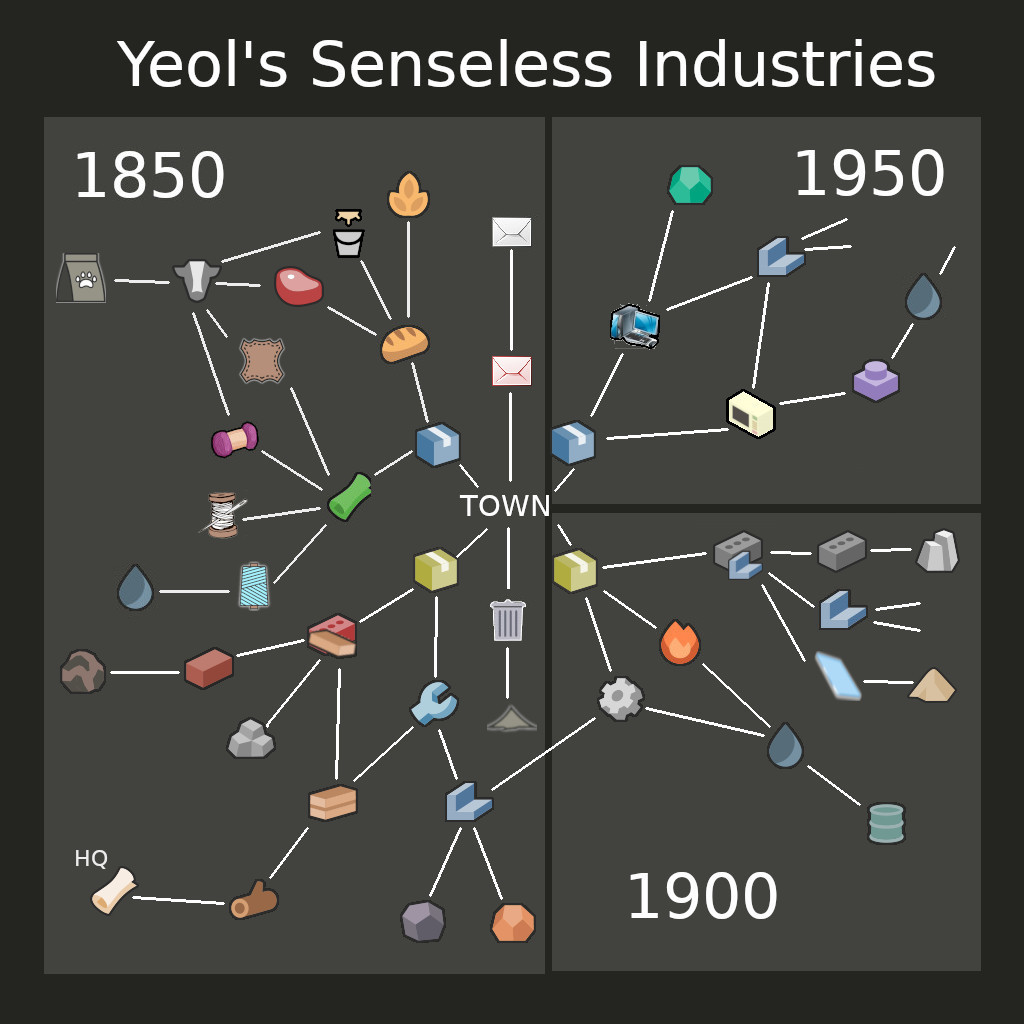 1. INTRODUCTION
The industry model has been completely overhauled. The original industry chain has been altered in many ways. New concepts have been introduced, and original concepts have been modified. The result is a different industry system with another feel. Some may like it, some not. If you don’t like the complexity, don’t used it. If you like it, well… have fun!
2. TWO CARGO PER TOWN
Senseless uses another approach to the 2 cargo per town. The two cargo units remain, but the new concept introduces commercial centers and industrial parks. Near each town you’ll find these zoning, and so also in Senseless. Industrial parks will be a conglomerate of industrial entities which deliver industrial products to the city nearby. They will receive intermediate products and convert them into abstract end products called “industrial goods”. Commercial centers play a similar role: to produce commercial products for the city. As a player you’ll distribute these commercial and industrial goods to the respective city districts where they are needed, so the people are satisfied, and the city will grow
2a. MAIL
Senseless has a mail system. Mail will be send to a post sorting center, and distributed again to the town buildings.
2b. WASTE
Senseless has also a waste system. Waste will be producted by town buildings, and can be dumped at a landfill, or later disposed at more modern plants.
2c. HQ
Senseless explores the possibilities to interact with the HQ (headquarter). You can now deliver PAPER to your HQ, and people can work there. No actions or consequences are programmed yet.
3. TECHNOLOGICAL AGES
Senseless introduces the “era” concept. 3 different eras have been introduced, so the player will have a more complete sense of technological evolution. Not only vehicles will change during time, but also the industry types available.
3a. STEAM AND STEEL ERA
The period from 1850 to 1900 is dominated by steam and steel. The industrial revolution is fully developing and the steam locomotive is the exponent of this era. Towns are still rather small, the landscape still quite rural. It’s to you to bring progress to all corners of the map, connect the towns with fast transportation and be a part of this new era by shipping the cargo around.
3b. ERA OF PETROL
The invention of the combustion engine will bring a new dynamic to the industrial era. From 1900 the world will be dominated by oil and fuel, by machines and accelerated productions and transportation. New industries will become available, and you will be able to place them where you think they may function best. A new industrial park type will be available to bring these new industrious products to the towns.
3c. ERA OF PLASTICS AND ELECTRONICS
Once plastics and electronics have been invented, the commercial sector will explode. Appliances and electronic devices will be demanded by the commercial sectors. People want them, the comfort, the pleasure, the ease these new products bring are a success. You’ll have new opportunities with new industry types coming available, and a new type of commercial center with the new modern products of consumption.
4. CARGO TYPES AND VEHICLES
No matter what other vehicle mods you use, Senseless will use them also, and will integrate them into the new industrial system and cargo chain.
5. HUBS
Senseless does not introduces “hubs”, but this new organisation of production and goods makes the use of huge cargo hubs more interesting. The original industrial model was strongly focussed upon satisfying demand per town individually. This has been thrown open, and the entire map can now be an integrated system of production and shipping.
6. CHALLENGES
Senseless will be a little more challenging then the vanilla game. Starting a new game in 1850 will proof to be a bit more difficult in finding good connections, and profits per line might be less. During the game you’ll want to add new industries. You are free to do so. Even, when you change era, you’ll have to place the new industries yourself. They will not appear by themselves.
7. LIMITATIONS
– Senseless is a complete overhaul of the industries in Transport Fever 2. This mod will conflict with any other mod that modifies industries and cargo chains.
– Senseless can not be added to existing savegames. The already placed industries on the map will not notice the modifications. Use Senseless only with the start of a NEW campaign.
– Senseless can’t be removed from a savegame. The savegame will not load any more.
8. THE FUTURE
I have still a few plans with this mod. But a lot of ideas I can not yet solve. I’ve not yet enough knowledge about modding TpF2 to be able to change all things I would like. But if Senseless seems successful, I’ll work on an evolution. Whereto? That will depend upon your feedback.

v1.1 – Fixed the crash when placing the electronics devices factory.
v1.2 – Raw resource industries are now substantially more expensive
v1.3 – Fixed the cargo inject script, to fix the cargo bay capacities of a large number of vehicles.
v1.4 – Introduction of MAIL
v1.5 – Residential MAIL has been added.
v1.6 – added clay and brick works for the building materials
v1.7 – fixed a problem where a few vehicles that should, could carry bricks
– made all early tanker type vehicles to appear only after 1900 (age of petrol)
– increased the capacity of the commercial center and industrial park
– introduced a WASTE system for townbuildings, and created the LANDFILL to bring the waste to
v1.8 – Added Headquarter (HQ) interaction: deliver paper to it
– fixed the missing image for the postal sorting center in the industry bar
v1.9 – fixed a crash when building a HQ with new game
v1.10- prevented the possiblity to place the HQ multiple times
– created categories to group industries by type in the manual industry bar
v1.11- Introduced a new cargo chain for modern construction materials with concrete, steel and glass
v1.12- Fixed a few bugs regarding cargo injection
v1.13- Industries and HQ accept now workers, the HQ handles mail. No actions or consequences are linked yet
v1.14- Increased the capacity of the modern commercial center and industrial park
– Introduced UNSORTED MAIL, so all mail HAS to be sorted by the Postal Sorting Center
v1.15- Introduced an extended WASTE disposal chain, with INCINERATION PLANT and RECYCLING CENTER
– Fixed the name of the HQ (but no more cargo stats