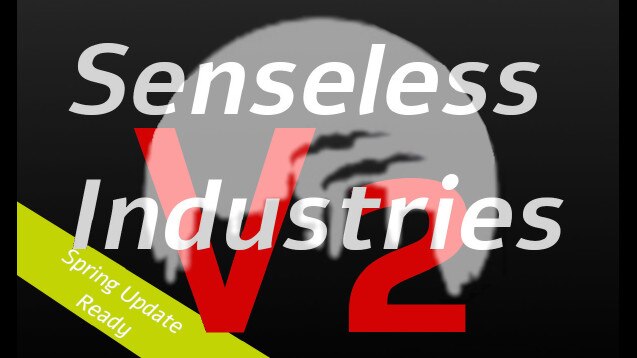 What’s new since Senseless Industries 1.5x?
Ready for Spring 2022 Update, with appearing and disappearing industries
0 -> 6 types of cargo per town, depending on the year and size of the town 50+ extra cargo types, and industrial plants, compared to the base game
Technology going further into the future (computers…)
Industries are taking into account the game starting year (only with the Spring update)
Small towns may appear near the largest, most productive industrial plants
Also, playable without Spring Update

What’s to know before installing this mod?
Do not run Senseless v1.x and V2.x together: only one of them may be loaded
Once a game is run and saved with Senseless V2 you can not return to V1
When continuing an exiting Senseless V1.x game with V2.x, many industry chains will be broken and will need your attention to fix them.
Suggested to start a new game starting at 1850, to enjoy the entire voyage through the eras

This version is considered beta as long as the Spring 2022 Update has not been released.

INTRODUCTION
The industry model has been completely overhauled. The original industry chain has been altered, new concepts have been introduced, and original concepts have been modified. The result is a different industry system with another feel. Some may like it, some not. If you don’t like it, don’t use it. If you like it, well… have fun!
Version 2 introduces 6 cargo types for the towns. Zero to six cargo types appear, depending on the size of the town and the current game year. So there’s a stronger sense of technological progression. A few modern technologies have been added.
TECHNOLOGICAL AGES
Senseless introduces the “era” concept. 3 different eras have been introduced, so the player will have a more complete sense of technological evolution. Not only vehicles will change over time, but also the industry types available.
STEAM AND STEEL ERA
The period from 1850 to 1900 is dominated by steam and steel. The industrial revolution is fully developing, and the steam locomotive is the exponent of this era. Towns are still rather small, and the landscape is still quite rural. It’s up to you to bring progress to all corners of the map.
ERA OF PETROL
The invention of the combustion engine will bring a new dynamic to the industrial era. From 1900 the world will be dominated by oil and fuel, machines, and accelerated production and transportation. New industries will become available, and you will be able to place them where you think they may function best. A new industrial park type will be available to bring these new industrious products to the towns.
ERA OF PLASTICS AND ELECTRONICS
Once plastics and electronics have been invented, the commercial sector will explode. Appliances and electronic devices will be demanded by the commercial sectors. People want them, the comfort, the pleasure, and the ease these new products bring are a success. You’ll have new opportunities with new industry types coming available, and a new type of commercial center with the new modern products of consumption.
INFORMATISATION
At the end of the 20th-century, computers and the internet will appear, demanding their chain of production and goods to be delivered to the largest of cities.
CARGO TYPES AND VEHICLES
No matter what other vehicle mods you use, Senseless will use them also, and will integrate them into the new industrial system and cargo chain.
CHALLENGES
Senseless will be a little more challenging than the vanilla game. Starting a new game in 1850 will prove to be more difficult in finding good connections, and profits per line might be less. During the game, you’ll want to add new industries. You are free to do so.
LIMITATIONS
Senseless is a complete overhaul of the industry working, and thus will conflict with many other mods that modify cargo types and production chains.
Senseless can’t be removed from a save game. The save game will not load, or not be playable anymore.