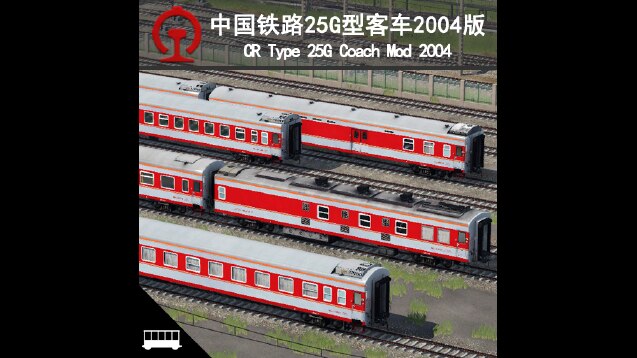 If you encounter the problem of missing sound effects, please unsubscribe from the “China Railway Coaches Sound Pack” and re-subscribe to load it, and raise the priority of the sound pack mod.

The model of this package is made with reference to the third batch of 25G coaches, and the various types of 25G coaches are deeply restored. It also adopts AC380V power supply (non-machine supply), and the electrical and signal transmission lines have been better restored.

As shown above, when manual grouping is completed, the intermediate or trailing train will be automatically identified so that the correct connection logic can be achieved. Due to the AC380V power supply, the first train behind the machine is not connected to the locomotive, and the correct connection logic is achieved by purchasing the train in pre-formation mode (note that the first train behind the machine purchased in manual formation will still show the electrical and signal transmission lines.)

The window glass effect has been given attention, well after continuous experimentation and optimization, it now has a few layers in the game, I hope you like the effect.

Under body braking equipment has also been studied by the actual car and the model, restoring the braking machine location and piping layout.

The tail marker is an important tool to indicate the integrity of the train, and electric lights should be used for the tail marker of passenger trains. Likewise, the placement of two types of column tail lights has been accurately restored.

The two columns of the air-conditioned power car, baggage car, and dining car have the same side tail lights.

The two-column tail lights are on the diagonal side for hard-seat cars and other vehicles carrying passengers.

The redrawn PBR material further enhances the display of the model.

The cooling fan exhaust blade of the air-conditioning power generator in order to restore the effect of being blown up by the strong wind, produced many animation effects, each fan blade has separate animation parameters, just to make your game a little more dynamic.

More details are waiting for you to discover!

Despite the more refined effect, the model will in fact consume fewer system resources. While ensuring excellent results, with the multi-level LOD system, the display detail will be further reduced when the trained model is in a distant view, more resource-efficient, and smoother.

Caution:
Please be sure to load the necessary items “25G type bus sound effects
The original model of this work is from the free shared TRS plug-in made by Ocemy, and the secondary creation of it, I and subscribers should consciously abide by the following license
This work shall not be used for commercial purposes.
No legal terms or technological measures may be used which restrict others from doing what is permitted by the license agreement.