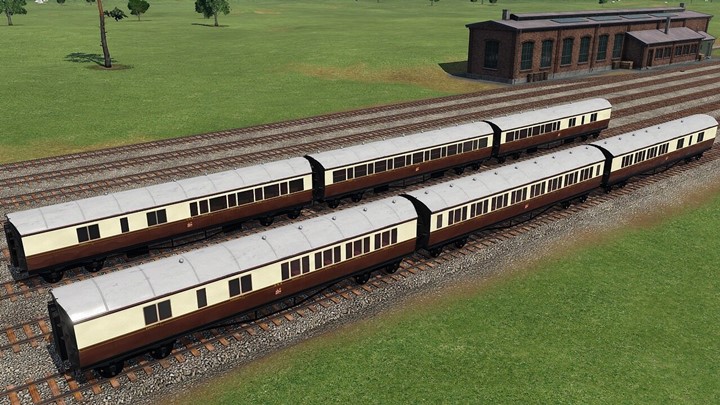 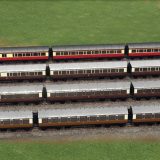 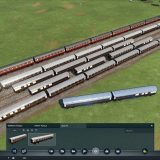 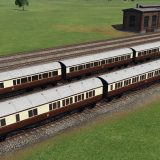 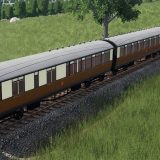 One of the most popular coach designs of the Great Western Railway was the ‘Toplight’, so-called for the small opaque windows above the main windows. Typically 57 feet (17m) long, initially built with wood paneling in 1907 and metal being used from 1912. Most were a compartment construction with a side corridor and enclosed gangway connections between carriages. Most had two water closets for the public convenience, should passengers need to spend a penny. The brake version has half of the space used for luggage, light parcels and the guard’s compartment with the hand brake (to hold the train when the engine was uncoupled).

When Charles Collett became Chief Mechanical Engineer of the GWR, amongst his new designs were bow-ended carriages to succeed the Toplights. The bow-ended design shortened the gang-way connections between coaches, that had previously frightened some passengers. Fast and numerous production of these coaches in the 1920s meant they comprised the large majority of mainline stock by the 1930s.

Support custom colours and all have passenger characters. No animation, aging or user logo. Includes placeable Asset versions, which can generate a line of up to 12 coaches (to be placed on straight and level track).

Limitations: Collett Suburban (non-corridor) versions will be added to this mod as updates at some point in the future.